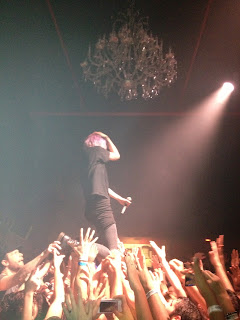 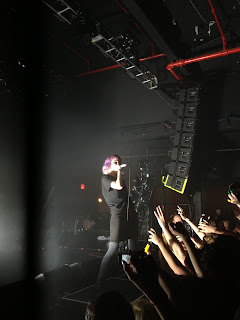 With their third full-length album (III) set for release in November, Crystal Castles began an exhaustive tour on September 27 at The Fillmore in Charlotte, NC.  Chronicling a live Crystal Castles show is a lot like attempting to accurately re-enanct mass hysteria, but this much can be certain- if you thought their live presence was electrifying on previous circuits, prepare yourself for the "steroid version" in 2012 and beyond.  Crawling across the stage on all fours Exorcist-style to the pulse of setlist opener "Plague" (one of the two new singles already released from III), Alice Glass sported a freakishly purple/blonde bob that caused her to resemble a cross between Heath Ledger's Joker and Effie Trinkett from The Hunger Games series.  It was one of the rare times that the essence of shock factor felt genuine and organic- it didn't hurt that what followed was a typically unpredictably shattering performance from the the increasingly legendary frontwoman (with no less than six crowd surf moments).  Not to be overlooked was Alice Glass' reliable partner in chaos, Ethan Kath, who radiated intensity as he lurked behind the Korg stage right.  One of the highlights of the evening was the duo disappearing behind the equipment to deliver an epic smorgasbord mashup of fan favorites "Vanished", "Crimewave", and "Untrust Us".

Bottom line- this is either your type of thing or not.  But if you're even remotely curious, jump at the opportunity to experience Crystal Castles when they come near.  It's obvious these guys are in the midst of honing their craft to another level and it would be a shame to miss it.  Now... bring on III. 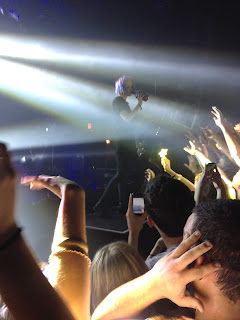