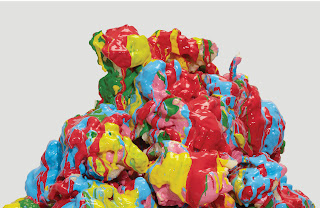 Innovation has always been one of Battles’ strong suits.  While 2007’s Mirrored showcased their propensity for skillfully blending noise and melody, last year’s Gloss Drop proved that the band was still able to muster the best of their creative forces after the departure of vocalist/guitarist Tyondai Braxton in 2010.  With such a long wait in between their first two full lengths, it came as a nice surprise to learn that the band was releasing a remix album, Dross Glop(a clever spoonerism of the original album's title).  Further adding to my delight was the fact that artists including Shabazz Palaces, Gang Gang Dance, and Hudson Mohawke would be lending their talents to the mix.

Despite the hype and expectations of a creative tour de force, however, Dross Glop falls disappointingly short of its potential.  The pacing is odd, the songs don’t flow well together, and even the more alluring tracks begin to drone on without much variety to keep the listener’s attention.  Don’t get me wrong – there are moments of beauty here, such as Qluster’s seductive re-imagination of the synth and percussion on “Dominican Fade,” and the chilling urgency of Gui Boratti’s “Wall Street” once it finally picks up.  For the most part, though, the album zig-zags through disjointed alleys of sound, like your 80 year-old grandmother trying to ride a Harley-Davidson for the first time.  And we all know how that turns out.

For a remix album, there’s a lot of space, both sonically and metaphorically.  The Alchemist’s version of “Futura” sounds like it could have easily been featured on a sci-fi movie soundtrack and Patrick Mahoney and Dennis McNany’s remix of “My Machines” feels like the perfect music for a futuristic alien dance party.  But on the whole, where Gloss Drop shimmered, its successor sounds lackluster.  Instead of an elegant re-construction, the songs on Dross Glop come across more like an unnecessary renovation, as they attempt to repair and paint over areas where the original never needed a fix-up in the first place.  Long story short, there’s really not much value added and it’s probably not worth the asking price.  Although the idea and the effort behind this record are praise worthy, Dross Glop’s shortcomings serve as a testament to the oldest cliché in the book: “If it ain’t broke, don’t fix it.”