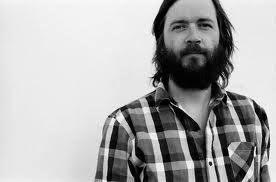 Fr. Jones shoots the breeze with Bear in Heaven's Joe Stickney about the band's new album, drone sounds, jumping out of windows, and of course- Lana Del Rey.
FR: Can you tell us a little about the band name and how you guys got together?

JS: Yeah. John started it off as a solo project a long time ago. He was mostly doing ambient music solo. And one of his buddies did some artwork for an album cover. It was kind of scrambled and John asked him what it was and he said the picture was of a bear in heaven. So he went with that name- and then it turned into a band, a completely different band, in Atlanta. Several years later, the band formed in New York- I was friends with Adam in the band because we went to college together. I didn’t really know any of the other guys in the band. They were all friends from Atlanta from various different sources. Some of them went to high school together, some have known each other since childhood. James knew some of them from working for Table of the Elements, this record label that is no longer around. That’s how Adam met John and they needed a drummer when they decided to start writing music and they asked me to play.


FR: Your previous album titles come across as a little cryptic- intentional or not. Your new album title, I Love You It’s Cool- is there any significant meaning behind that?

JS: It’s pretty straightforward. We’re not trying to be cryptic here at all. It came inadvertently from our friend, Sadek, while we were writing the record. At one point, Sadek used to play with us in the band but he had to stop because he has his own graphic design company that he wanted to focus his efforts on. He came by the space one time and wanted to hear some of the demos. He drew a couple of drawings for me and John. The one for John was of this weirdo with like three eyes and four elbows that said “I love you, it’s cool”. We were kind of bouncing around a few different titles for the record- but we settled on that. It seemed to fit the intention we wanted to get across. It’s just a mood.

FR: How would you say the new album compares to the others? Your single, “Sinful Nature” feels more sensual and slightly less expansive.

JS: It’s difficult when you’re as close to it as we are to really categorize it. We’ve listened to all the songs in so many different iterations at this point. I’m sure we hear everything in an entirely different way than other people do. I feel like the categorization is best left to other people. I will say that this is the first time we’ve gotten together and written songs front to back intended for a record. The last one was written over a really long period of time and a lot of the songs changed drastically over the year and a half. I think that definitely influences us.

FR: How do you think your sound translates to a live setting?

FR: You guys are getting ready for SXSW. Have you ever played that before?

FR: Bear in Heaven has an affinity for drone. I’ve read that there is a version of the album slowed down to last several thousand hours.

JS: It’s streaming. You can check it out on the website right now.

FR: Have you tried listening to it? How far have you gotten through it?
JS: I’m mostly listened to it in chunks of late night stupor. I’ve definitely gotten sucked into it on a number of occasions. I decide to check out what’s going on with the drone and there’s some nice, trippy visuals going on at the website. You can definitely get wrapped into a meditative mindset. So I’ve listened to it in a few chunks but Adam listens to it nonstop. He’s got in his earbuds right now. He drinks a lot of Code Red and listens to the drone.

JS: Into the shitter? Is that an acceptable response?

FR: That is an acceptable response.

JS: It’s hard to say. It seems like the only way people can make money these days is through advertising which is very unfortunate because it leads to a lot of people creating music specifically intended for a commercial- like, perfectly fit for a McDonalds commercial or something. If you’re making music with the intention of putting it in a Macy’s ad, the whole kind just fucking fails.

FR: On the same note, music is available in a variety of formats- digital downloads, CDs, vinyl, even cassettes are making a comeback. Is there any method that you guys like to hear music? In which format do you feel Bear in Heaven sounds best?

JS: We just got our vinyl the other day and it sounds phenomenal. That would be my method of choice. I would say to hear it really, really loud on your home stereo on vinyl and you should probably buy the 2 terrabyte hard drive that has our entire slowed-down record on it, play that at the same time, drink a lot of Red Bulls, and jump out of a window.

FR: How do you feel about Lana Del Rey ?

JS: I could give a shit. I heard a couple songs. I thought they were boring. How do I feel about any big fucking studio artist that gets pushed in everybody’s fucking face? I try to ignore it as much as possible.