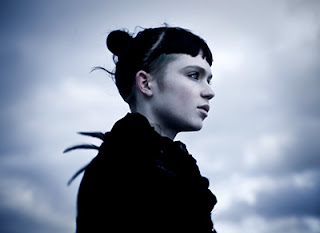 Fr. Jones shoots the breeze with Claire Boucher of Grimes about her new album, sonic manifestations of the brain, and the infamous Lana Del Rey SNL performance.

FR: How did the whole Moogfest experience turn out?
CB: Moogfest was pretty fun. Actually I had a great time. I didnâ€™t really see any shows but I hung out at a Daytrotter place the whole time and there was like unlimited food and all these artists came. I guess I did get to see shows because I got to see all these people come in and play. But we didnâ€™t really have anywhere to stay and they were very nice and just let us chill in their studio. Itâ€™s called like something- Mountain Studio. Maybe you know itâ€¦.
FR: I can look into it for you.

FR: Okay, so where does the name Grimes come from?


FR: Alright, if you say so. Visions is coming out in February and you just signed to 4AD from Arbutus. Can you talk a little more about Visions? Where does the album title come from?

CB: Itâ€™s sort of a referenceâ€¦ it sounds so pretentious. Iâ€™m going to sound like such an asshole.

CB: Itâ€™s partially a reference to Hildegard who I wrote my thesis on when I was still at the university. Sheâ€™s a really major inspiration for me. When I was writing the album, I sort of did a lot of thingsâ€¦ medieval and spiritual techniques like fasting and stuffâ€¦ to see what would happen. Iâ€™ve done it a little bit in the past to be productive. But I did it this time in an incredibly intense way. And it was an incredible experience- I kind of went crazy and so the album is about that. Visions is about that. I was thinking of a title and itâ€™s like realizing myâ€¦ vision? Maybe that sounds stupid but itâ€™s the sonic manifestation of my brain. I see music as such a visual thing. It doesnâ€™t exist in my head without something else.

FR: â€œSonic manifestation of the brainâ€ is a great sound-byte by the way. What is the difference between this and your previous albums? You had three releases it felt like in the same twelve month time period. This one though is getting tons of hype. Not that your others one didnâ€™t deserve hype- I love Geidi Primes and Halfaxa. But the difference between this and the others in regards to the sound and recording process, how can you compare them?

CB: I think hi-fi counts for more than anyone realizes. My other albums are super ghetto. When I listen back, it sounds really amateur. I can definitely see how it could be confusing for a lot of people to hear music like that. With this album- my manager is a sound engineer and when I finished â€œVanessaâ€, he sat down with me and we produced it like it was a pop song. It was a tutorial on production in general. He was like, â€œWeâ€™re pushing vocals up.â€ And I was like, â€œNo! No more vocals!â€. But he promised me that it would be more successful if we make the vocals louder. I sort of had this â€œbreaking experience brain discoveryâ€ because I love pop music- but there was a final step in realizing that what I was doing was actually really different than that. Maybe thatâ€™s not a good way of explaining it. I think with this record I really knew what I was doing and I feel like I was more able to craft this while walking the line between something more familiar in a pop way- but also pushing the boundaries enough. This is how I would want to do it instead of a big mistake that might sound good but is ultimately just throwing stuff around to see if it sounds good which is kind of what the other albums were.

FR: Right. I could tell with Geidi Primes- itâ€™s very experimental. But your stuff on the Darkbloom album felt like it was moving in more of a pop sensibility and direction. Are we going to get a video for this new album- for â€œGenesisâ€ maybe?

CB: There will be a video for every song I think if I can pull it off.

CB: Iâ€™ve shot three so far. Iâ€™m shooting another one in a couple weeks and Iâ€™ve made one out of found footage. So there are five that will be done really soon. Hopefully, I can finish the rest in April. â€œGenesisâ€- my friend has a VHS recorder and Iâ€™m going to get a bunch of girls and they will all be like angels going into buildings and setting off fireworks, breaking stuff, and doing graffiti.

FR: Sounds like itâ€™s way more depraved too- which is good.

FR: How do you feel the new album will be live? Youâ€™ll be touring very soon. Is it just going to be you? Or will you have any backup or what?

CB: Iâ€™m touring with Born Gold and theyâ€™re actually also playing in my band so theyâ€™re going to drum for me and play keyboards. But I try to switch it up every tour. I always have some friends with me so I just choose some random friends and see what their capabilities are and what they can do.

FR: Do you have any particularly favorite places to play?

CB: I fucking love Miami. I donâ€™t know why- I think I have the most fans in Miami. I donâ€™t know. People in Miami are really cool. Everyone is wearing spiky shit. There seems to be this weird thing happening in Miami. One of the best shows Iâ€™ve ever played though was in Mexico City. That was really fun. Every place is different because there are different kinds of crowds. Like Baltimore- that was really fun. In Detroit I played in a bowling alley. That was great.

FR: You described the new album as a cross between Aphex Twin and TLC. Thatâ€™s a hell of a breed. Do you have any other influences that drive your work?

CB: I have a lot of influences. As far as the music I was listening to most when I was making this album- it was definitely a lot of Outkast and stuff. I know a lot of those producers are really influenced by Aphex Twin. I listened to IDM and New Jack Swing mostly- which are more similar than people would think.

FR: Iâ€™ve read you have a background in ballet. I was wondering if your history in dance is reflected in your music.

CB: I remember first getting into music because of ballet I think. Itâ€™s hard to say. One of the videos I just did is a pretty intensive ballet video. I donâ€™t know if ballet and the music I make now is super related. But I definitely love ballet, the intensity of ballet. I think ballet gave me a work ethic, an intense worth ethic. And I think thatâ€™s how itâ€™s most influenced my music.

FR: Did you see Black Swan?

CB: It seems to me that indie and mainstream are colliding and there will be some sort of compromise in between. I feel more and more films are going to be become more radical with their soundtracks and publishing like what happened with Tron and stuff. Itâ€™s going to be way more feasible for artists to make a living off working in film. Iâ€™m definitely trying to score films, thatâ€™s something Iâ€™m interested in- the idea of a pop score. I feel like that is going to happen more. Itâ€™s hard to say. I wish people would buy records more but I think they are buying records more. Iâ€™ve noticed that on touring, people are asking for vinyl way more. I hate the idea of selling music but we need to make a living off it so itâ€™s a really hard contradiction. Ideally you want to give people something so theyâ€™re really getting something for their money- which is why I like the idea of artists working in more film and multimedia. I donâ€™t know- I like the idea of commission. Letâ€™s say you score a film with a budget and they pay you, you can probably live off that for like three years if the movie has a really great soundtrack.

FR: Going back to vinyl- vinyl encourages the listener to be more patient. Iâ€™m as guilty as anybody with an ipod on shuffle just having one song after another. I feel like vinyl is more enjoyable in that regard.

FR: Have you been following this Lana Del Rey thing? Did you see her on Saturday Night Live?

CB: Yeah. I watched that.

FR: What is your take on that whole thing?

CB: Well, I donâ€™t want to say anythingâ€¦. Let me think. I just feel like she is not necessarily in control of whatâ€™s going on and I feel as a prominent female performer, itâ€™s very important to be strong. I just kind of get the Britney complex coming from this thing like sheâ€™s really unsure or something and her lyrics are really depressing and posturing to men in her life and stuff. I just feel like itâ€™s derivative and unhealthy. Okay, wait. Iâ€™m going in a bad direction.

CB: It just really shot home the concept to me that sex sells which is really depressing. The whole Lana Del Rey situation is dark. Itâ€™s justâ€¦ itâ€™s just dark.

FR: Like an iconic moment for all the wrong reasons.