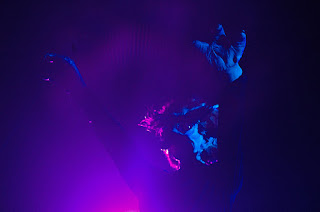 Believe it or not, I usually donâ€™t spend my early Sunday evenings jumping up and down in unison with hundreds of costumed hipsters to the otherworldly, euphoric sounds of arena space-rock/dreampop- but I happily made an exception for M83â€™s unforgettable set on the final day of Ashevilleâ€™s Moogfest event. And now the day of rest will never be the same. 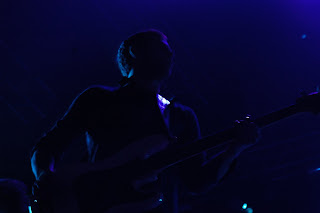 For clarificationâ€™s sake, Iâ€™m a little biased. M83â€™s Anthony Gonzalez has been systematically blowing my mind for about eight years now beginning with his minimalist, avant-garde electronic epic, Dead Cities, Red Seas, & Lost Ghosts (which somehow finds a world of soul in three minutes of deliberately repetitive notes and chords). But biased or not, my realist sensibilities had given me a cause for concern. First of all, M83â€™s set time had troubled me ever since the schedule was officially announced a little over a month ago. Sure, â€œMidnight Cityâ€ is currently all the rage (Iâ€™m pretty sure by now that Sirius DJs are dreaming about that digital yelp â†- see what I did there?). But by playing at 6:30 (!) Sunday evening, M83 would be effectively mopping up the floors from two previous days of garish, musical excess. With Neon Indian, Ghostland Observatory, and Umphreyâ€™s McGee still waiting in the Sunday night wings, M83 was placed in a decidedly odd position of possible Moogfest irrelevance. 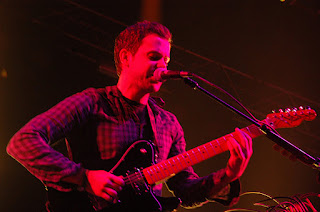 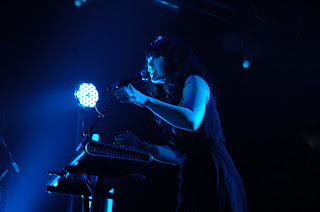 But if any album can reinvigorate a sluggish crowed it would of course be Hurry Up, Weâ€™re Dreaming. The band itself was comprised of a mere four people including Anthony Gonzalez; among them, Morgan Kibby, who most fans would recognize as the female vocalist from 2008â€™s Saturdays=Youth, as well as a new fresh-faced guitarist named Jordan (who was actually celebrating his twentieth birthday). As six-thirty rolled around, the crowd at the Asheville Civic Center had begun to dominate the floor area forcing others to resort to balcony seats.
And this is all before a costumed monster slowly walked onstage to raise its arms in youthful defiance. At the time, it merely seemed odd. We would know later that this was a warning signal for the crowd- things were about to get awesome. In an hour and fifteen minutes, M83 effectively ended Moogfest for hundreds of people. Any follow-up experiences that evening suddenly became an anti-climactic formality**. 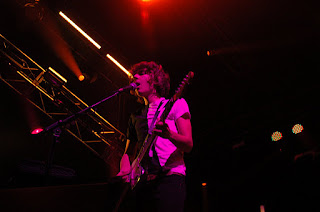 The setlist was weighted mostly to
wards Dreaming and Saturdays with â€œTeen Angstâ€ receiving the nod from Before the Dawn Heals Us (no time for avant-garde minimalism here!). Yet it never really felt like a collection of songs at all- instead, more so a giant, relentless wall of sound. And I say this without the aforementioned bias, these guys put out sound the way a fire hose puts outÂ water. From the opening â€œIntroâ€ to set-closer â€œCouleursâ€, everyone inside the Civic Center was under the bandâ€™s spell- it was palpable, you could actually feel it. And when an artist can do that, it becomes more than special- it becomes a dream
** Trust me- this is no exaggeration. The usually awesome Neon Indian started fifteen minutes after the M83 show and it seemed as dynamic as a wet firecracker. Try going to a Neon Indian show and not enjoying it. Itâ€™s like trying to frown on a waterslide- but on this particular day, it all felt quite pedantic. Neon Indianâ€¦ pedantic! Hence the power of M83 at Moogfest. 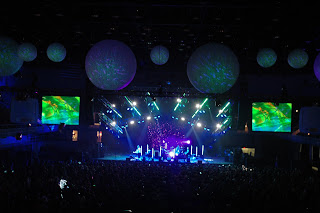